A New Year’s Resolution: The CFO Should Own Digital Transformation

Five Reasons Why the CFO is the Crucial Player in Digitalization

PE (and other business owners) have a DX ROI problem.

Let me translate the acronym-speak: Private equity (PE) partners and, in a similar way, boards of directors and shareholders at public companies, are struggling to see the investment return from expensive digital transformation (DX) initiatives.

Globally, companies have spent more than $1.2 trillion on digital reinvention over the last few years. The hard truth is that over 70% of those initiatives fail.

Shelving the next round of DX projects isn’t the answer: digitalization is often essential to the value creation plan and, for PE owners, to a successful, profitable exit. And the COVID-19 economy has accelerated and amplified the need for it.

What to do? Here’s an overlooked idea: Turn to the CFO.

Digital initiatives have a virtual carnival of stakeholders: the chief technology officer, the chief information officer, the digital marketing chief, the business department-specific lead, the software lead, human resources, the sales team, and so on. As the “bottom line” exec, the CFO is often left out of the tent. That’s a big mistake.

The CFO isn’t just a critical player to digital initiatives; the CFO is the crucial player in digitalization – and it’s time for firms to recognize it. The CFO is the conductor that enables the disparate digital instruments to play together as an ensemble. In other words, the CFO’s central role in DX initiatives is paramount. Here are just 5 of the reasons why.

The CFO is the champion of all enterprise data — the external data, the internal data, the historical data, and the employee data. But it’s not just enough to have, share, and refer to the data; it must be analyzed, and DX must then be aligned to it. That’s why effective digital transformation demands more than a data dump; it requires an adequately structured data warehouse to capture the relevant inputs and a business intelligence tool to showcase them (in context). Enter the finance chief. It is the office of the CFO that is most knowledgeable about the critical data parameters of the business. Therefore, the CFO can best put a framework around the data — a framework vital in fueling the DX strategy and completing the DX process.

Of the many hats a CFO wears, controller of enterprise risk is, perhaps, the most critical. For PE firms, DX is an important tool to increase value, particularly in a post-COVID world. Still, company management must use that tool while being mindful of the risks surrounding it in the form of data privacy, cybersecurity, regulatory compliance, and other areas. There is no other executive who can walk the risk-to-reward tightrope as well, or as accurately, as the functional head of finance.

The CFO has the best holistic, enterprise-level view. DX initiatives are, either by design or by occurrence, siloed across multiple, separate business units, resulting in islands of initiatives that don’t connect. As the keeper of the coins and the data owner, the CFO is best positioned to understand individual digitalization efforts and build the bridges necessary to align to a centralized enterprise strategy. Equally as important, she or he is also best positioned to build an external bridge — one that connects the company to the sponsor’s digital strategy across the greater portfolio.

4. Transformation has a timeline.

The CFO must make sure that the timeline is within the hold period. Most DX initiatives — at least the kinds that are genuinely transformative — are not of the weeks-long variety. They take months and often years. And then, like every renovation/construction project, they often take time-and-a-half on top of that. That’s “extra” time the sponsor or owner has not baked into the value creation plan. The role of the CFO is to help calculate a digital ROI strategy wherein bigger initiatives are broken down into smaller, more manageable, more return-rewarding phases. That ensures digitalization is not only in service to the business, but it’s in service to the investors’ timeline as well.

5. The road to process transformation runs through finance.

The CFO must be its main architect and driver. Indeed, there are few places within the enterprise as ripe for digital transformation as finance, and even fewer business units where the impact of DX will loom as large. As the jurisdictional and functional owner of many of the more antiquated, money-facing processes (order-to-cash, record-to-report, procure-to-pay), finance should be atop any enterprise transformation audit list. Of course, the digitalization of finance would be an impossible feat without the CFO’s guidance and involvement. But, the CFO’s role as digitalization driver extends beyond its importance to successful finance transformation. As one of the first functional DX stakeholders, the CFO will be an important example to peer business unit leaders with respect to the type of executive buy-in and in-the-weeds management necessary to ensure all digitalization efforts succeed.

What’s the bottom line? For sponsors, it’s not the overlooked importance of CFO leadership to DX success; it’s the inevitability of digital failure from their early and all-too-frequent omission. So, in the context of the calendar, and the spirit of the long-held tradition of the New Year’s resolution, PE sponsors might do well by honoring this one this year: stop excluding the CFO from digital transformation efforts.

A New Year’s Resolution: The CFO Should Own Digital Transformation

PE (and other business owners) have a DX ROI problem. Let me translate the acronym-speak: Private equity (PE) partners and, in a similar way, boards 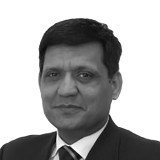 Sanjay is a Managing Director with nearly two decades of experience leading performance improvement projects – both as an interim CEO and in restructuring advisory roles – in various sectors such as Retail, Manufacturing, Auto Ancillary, Logistics, and Technology.  Read more