As Seen in: The Wall Street Journal

Private-equity firms frequently tout the guidance and value they bring to management teams of the companies they back. But a new survey reveals that many chief financial officers at those companies don’t see the firms living up to the hype.

“The CFO office is increasingly becoming a much bigger strategic hub within any portfolio company,” said Nick Leopard, founder and chief executive of private equity-focused consulting and technology firm Accordion, which surveyed 200 private-equity executives and portfolio company finance chiefs about their interactions.
“The problem is there’s a ton of misalignment.”

Among the 100 private-equity professionals surveyed by Accordion, 92% said they believe they are living up to the expectations of their portfolio company CFOs. But just 29% of the 100 CFOs in the survey agree. 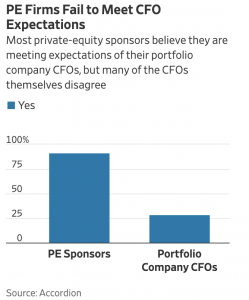 Such perception mismatches underscore the importance of communication between firms and CFOs and their teams. The financial professionals in portfolio companies have grown increasingly important to the development and execution of corporate strategic growth plans, executives say.

“You’re in somewhat of a referee role between the founders and the PE firm, so a lot of times you have to manage expectations,” said Tim Jaeger, finance chief at Traditions Behavioral Health, a WindRose Health Investors-backed mental health services provider.

Some of the disconnect can stem from different ideas about the sponsor’s role and whether its approach fits the CFO’s perceived needs, executives say. Some firms pursue an investment style that relies heavily on operational advice, while others adopt an investment model that leaves much of the operational decision-making to management. Among CFOs surveyed, 29%, or nearly a third, said they aren’t working with their preferred private-equity investment model.

“Before going out to market, it’s important to be very clear on what type of sponsor you want and what [their] involvement is going to be, because it’s such an intimate relationship,” Mr. Leopard said. Accordion itself is backed by midmarket firm FFL Partners, which invested in the company last year.

Bryan J. Carey, a consultant who has served both as a CFO for a number of private equity-backed health-care companies and as an operating partner for private-equity firms, said that sponsors often aren’t aware of the undue burdens their firms can place on CFOs. 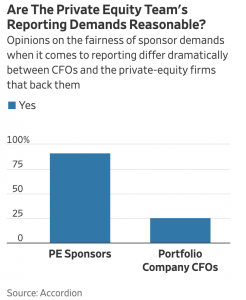 That disconnect is especially evident when it comes to reporting. Among private-equity professionals surveyed by Accordion, 92% said they believe their reporting demands on CFOs are reasonable, while only 26% of CFOs surveyed agreed.

“Every sponsor I’ve worked with has said that they’re not intrusive,” Mr. Carey said. “But they really have no idea, because there are so many levels of interaction.”

For example, he said that a partner at a private-equity firm may hold a weekly or monthly call with a portfolio company CFO. But that same partner may not realize that the CFO often is also dealing with frequent information requests from other professionals at the private-equity firm seeking details on key value drivers or specific data for their own reports to limited partners.

The survey did uncover areas of agreement among private-equity firms and portfolio company CFOs. Both groups put technology enablement and cost reduction as their top priorities in resource allocation over the next year. They also both agreed overwhelmingly that CFOs are under-resourced and need additional financial support to meet their sponsor’s demands.

Mr. Jaeger, who worked for at least two other private equity-backed companies before his current role, said it is important for both CFOs and private-equity firms to develop clear channels of communication and to make sure early on that they both understand how those channels will work.

“No surprises are key,” he said. “Bad news doesn’t get any better with age.”

Private-equity firms frequently tout the guidance and value they bring to management teams of the companies they back. But a new survey reveals that many chief financial officers at those companies don’t see the firms living up to the hype.