As Seen in: Dallas Business Journal

A private equity consulting firm is moving to Uptown with hopes of nearly doubling its local team by the end of the year.

“There are a lot of private equity companies in the Texas market…and the portfolio companies that private equity firms are investing in are in Texas,’” Samnani said. “‘How do we hire the right leadership team and folks across all of our service offerings here locally so we can actually penetrate the market?’ Not only support them and be closer to them but also have a different angle and an opportunity to do business development from a CFO perspective…That was the vision we laid out.”

Samnani, the first employee hired in Dallas in 2019, co-leads Accordion’s Transformation Practice and heads the Dallas office. The company has a North Texas workforce of about 35 folks, and Samnani said he’s aiming to grow the team to 50 to 60 people by year-end. Samnani added there are also a handful of folks in Austin and Houston who report to Dallas.

Accordion recently took 4,041 square feet in the Parkview at 1920 McKinney in Uptown Dallas to accommodate the growth. Samnani said the new office space, which should be open by August, is important for the team to collaborate on projects.

“We’re firm believers in not just having remote employees, but having presence in offices as well,” Samnani said. “In consulting, and the type of work we do, we think there’s a lot of coaching. We’re a very collaborative firm. So our thought process is that we want to get robust offices, we want to get back to being in conference rooms, talking through business issues, and really focusing on how we can upskill our folks and provide a platform where they can continue to grow and excel.”

Samnani said there’s top talent in Dallas, and the company has brought on recruiters to target folks in the region. He said Accordion can attract candidates because it’s fast-growing, works with some of the largest private equity firms and facilitates cross-collaboration between teams.

Last May, the company acquired restructuring and turnaround firm Mackinac Partners, which added half a dozen folks to the Dallas workforce and about 40 across the firm. Accordion has been working from Mackinac’s former office in Preston Center for the last year, Samnani said. 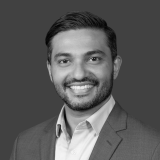 Junaid is the Co-Head of Accordion’s Transformation practice with nearly two decades of experience in numerous consulting leadership roles. His specific expertise includes performance improvement, technology transformation, merger integration, and divestitures. Over the course of his career, Junaid has led engagements for public and private organizations and has serviced more than 30 private equity firms.  Read more

Spotlight on Rajit Kabadi: Why I Joined Accordion

Rajit Kabadi is not your typical consultant, which explains the mutual attraction between him and Accordion: the “atypical” consulting firm.

As we see it, Big Four alums have four big reasons to consider a career move toward a more entrepreneurial environment (like Accordion). Hear from Accordionites who made the leap.

Nishant Machado is a man of many titles (and many talents). In this Q&A, we unpack Nishant’s evolving role in the context of Accordion’s expansion.